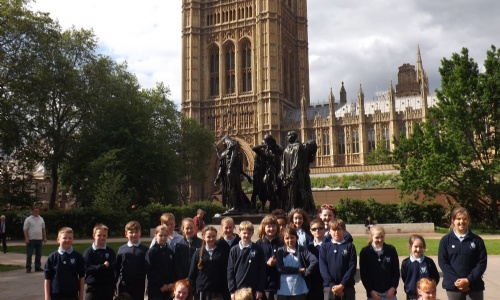 Year 6 pupils visited the Houses of Parliament in London to learn more about democracy and law making in the place where it happens.

The day began with a amazing trip on a Pendolino train which gets you to London from Manchester in just over two hours. Virgin Trains staff were very helpful and provided everyone with pastries and water for breakfast.

The tour was incredible. The UK Invictus Games team were also having a tour. We saw some famous MPs - including the Education Secretary Nicky Morgan. The debate that we saw in the House of Commons was all about the European Union. We took part in some debating games. Finally, our MP came to meet us - David Nuttall, Conservative MP for Bury North. He took questions, including a very thoughtful one about the Anaerobic Digestion Plant  that had been planned for Ramsbottom.

After a long walk back to the train, we eventually arrived back in Manchester at 20.20. A wonderful experience had been enjoyed by everyone!

Take a look at our photographs from the day in the Gallery section of this site.