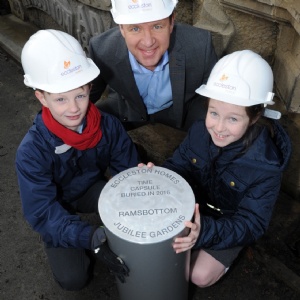 St Andrew's pupils make history with the burial of a time capsule following the discovery of a capsule buried in 1898.

Following the discovery of a historical time capsule uncovered at a building site of the former Ramsbottom Cottage Hospital, pupils at St Andrew’s Primary School created their own.

The artefact was uncovered at the site of the former Aitken Memorial Hospital, and contained a number of coins and a newspaper cutting from the year the hospital was built in 1898.

The capsule was buried by Lady Aitken, whose family set up the charitable hospital.

Our children created their own time capsule to bury on Thursday, February 11, together with Ramsbottom Heritage Society, at the Eccleston Homes development, Jubilee Gardens.

Items included a photograph of the school, 2016 coins, a picture of the Rio Olympics logo, local newspapers and a brochure for Jubilee Gardens.

A pediment from the original hospital was recovered, restored and replaced at the Jubilee Gardens site.

Because the pediment shows the Aitken family emblem, Eccleston Homes also tasked St. Andrew’s Primary children to design their own family coat of arms. The three winners were awarded with book vouchers when they joined Year 6 pupils at the burial ceremony.