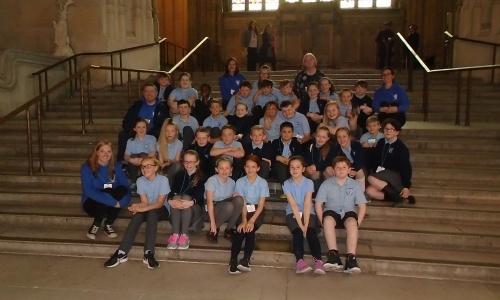 Year 6 pupils and school staff travelled  to London to visit the Houses of Parliament. Travelling by train, the group also had time to see many of the greatest sights such as Covent Garden; Trafalgar Square; Buckingham Palace; St James' Park; Horseguards' Parade; Whitehall and Downing Street.

The highlight of the trip was a visit to the Houses of Parliament. The timing of the trip was perfect as the Prime Minister has called a General Election on 8th June and the day of the visit was the day before Parliament was due to be dissolved. There was a real sense of anticipation and excitement. The children visited the House of Lords and listened to a debate about social media. The photograph above shows the group in Westminster Hall on the very spot where King Charles I was tried.

In Parliament's Education Centre the children learned all about the Suffragettes and the right of people to vote. There was a lot of thoughtful and eloquent discussion between the children.

The children were a credit to their school and families.